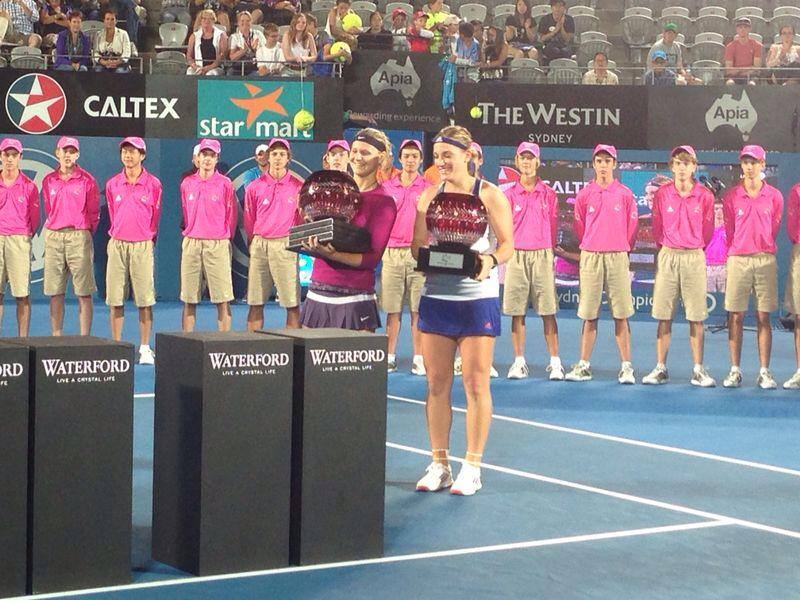 SYDNEY January 10th 2014 – Lucie and Timea Babos teamed up for the very first time in their career to play together in a doubles competition. During the Apia International Sydney Tournament they improved their performance from game to game. The highlight came in the final when they was able to beat World Number 1 Sara Errani and Roberta Vinci. 7-5 3-6 10-7.
En route to the final they beat already No.2. seeds and 2011 Wimbledon champions Kveta Peschke and Katarina Srebotnik.

“We both played really well in every match this week. Most importantly we just tried to enjoy ourselves and have fun out there – and the last match tonight was just amazing.” said Lucie.

“Like Lucie said, we just tried to enjoy ourselves. We didn’t put too much pressure on ourselves tonight – they’re the World No.1s, and there’s a reason why. But I told Lucie before the tie-break I had a good feeling we would win, even though we didn’t play that well in the second set”, said Timea.

How did the two end up together? “To be honest, I just randomly asked Lucie if she had a partner here, because my partner didn’t come,” Babos said. “Hers didn’t either, so I thought we’d make a good team. We didn’t even talk about which sides or how to play – but I guess in the end it was a good decision!”

“We’d definitely like to play together again, but we both have regular partners,” Safarova added. “We’ll see when the opportunity comes again – for now it’s always nice to have each other as a back-up!”